As discussed before, beer is definitely not my drink of choice. So, when invited on a brewery tour for a buddy’s birthday, I was in for the camaraderie much more than the ever-growing craft beer scene in Vancouver – and this is why I feel the need to blog this out.

Whenever I stumble across a girl whose passion and fervour for what they do is absolutely contagious, I have to share. And that, my friends, is exactly the case with sommelier turned Vancouver wine and craft beer tour host, Ashley West of Vine & Hops. At the age of twenty, Ashley started in the world of fine dining, working for the renowned Teatro which boasts a 10,000 bottle wine cellar. There she tasted her first Grand Cru Lafite 1995 and that exposure quickly grew her passion for the finer things in life – namely wine. As her life threw her some curve balls, she moved to Oliver to cultivate her interest and try her hand in wine making at Road 13. Shortly after, she moved to Vancouver as a wine rep where she met partner (in life and business), Jayden. Over spirits one night, they realized how easily married Jayden’s background in non-profit event planning and her knowledge of wine are – Vine & Hops was conceived, and six months of planning and funding later it was born.

Now, in order to tell you why I’m so impressed with this little lady, I should paint a clear picture of the state we were in this day…

Six of the eight of us who were going on this tour had been partying at my parents’ place the night before – the type of shindig that saw us in the hot tub at 4am daring each other to jump in the unheated pool. So when my phone rang the next morning and it was Jayden, confirming our meeting an hour later, a quick scan around the room at the carnage of my friends made it clear we were going to be late. We packed up band equipment, made travel caesars (the Canadian version of Bloody Marys for my non-Canuck followers), and hit a drive-thru to try to pull ourselves together before the 45 minute drive.

When two of the six of us pulled up to the Vine & Hops van – an hour late – I was still applying bright red lippy to disguise the feeling of death inside of me. Ashley greeted us with an infectious smile, and she and Jayden didn’t skip a beat when I told them the others would have to meet us at the first brewery – clothing shopping was necessary en route because cocktail dresses are not brewery appropriate.

At this point in the tour, I hate my life. I’m cold, but somehow clammy. I feel bad for my two sober friends who have been waiting an hour for us to turn up. I’m hungry. And, most of all, I want to be on my couch – cuddling and watching Netflix – not sampling my least favourite alcoholic beverage.

First stop: Bomber Brewing. Thank goodness their resident tour guide was a well known friend of the guys, and therefore used to their antics. The first blonde beer we had was enough hair-of-the-dog to get us all back on our feet a bit, too. This brewery is incredibly charming and Canadian, epitomizing the unpretentious scene of craft beer making. We tried a couple of pretty unique brews here, and had an in-depth tour full of many F-bombs. 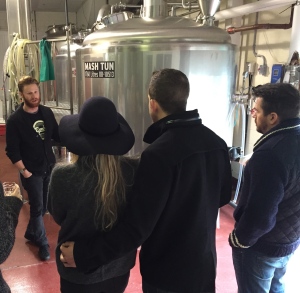 Being held up through a cuss-filled explanation.

Next stop: Main Street Brewing Company. Za-freaking-zing! This is where the beer started to kick in, the food was unbelievable, and I basically wanted to move into the locale. Although her background is in the pretentious world of wine, Ashley’s candor and chill vibe made it easy to ask (my usually ignorant) questions.

Food is a saviour.

Fun fact: beer flavour is nothing like a note in wine – they actually ADD the ingredients to the brewing process to get those trendy pumpkin, berry or herbal beers. (You probably already knew that…)

Last stop: Deep Cove Brewers and Distillers. This place is run by some young, impressive brewers who completely embody the “Beer Geek” passion of balancing art and science. Oh, and they also distill vodka and gin so I was a happy camper. Wandering through the brewery channelled a little Breaking Bad, which was good for a lot of Los Pollos Hermanos jokes. And I can proudly state, that we set a new record in the full-sized Jenga game they have to offer – if you can beat 33 levels, I will be very impressed. 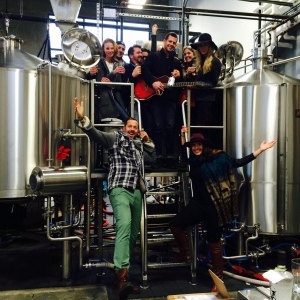 With more than 15 breweries and 6 wineries on their tour list so far, I would never hesitate to recommend Vine & Hops. Yes, you can jump into a tour on offer, but I would strongly advise getting a crew together and hiring these two on their own. Not only insightful, they clearly love what they do – her Christmas gift to him was an at home brewing kit! I will definitely be rounding up the ladies for a wine tour with them to absorb some more of Ashley’s knowledge in the very near future.

Confession: I probably liked Ashley off the hop because we were wearing matching hats.

Pictures by @kerrylawrencephotography (as usual)